Where a strategically employed Work Out ‘worked out’.

In this case study we dive into the specifics of an appointment as Receivers and Managers to a company by a major property investment fund. The goal? To recoup as much of our clients $18 million facility as possible.

The facility was in relation to a recently completed forty-two-apartment development on the central coast. Eight units had been sold, four contracts had exchanged but remained unsettled and eight additional properties were subject to lease agreements.

At the time of the appointment, appetite for apartments in the market was not sufficient to payout the loan facility in full. Furthermore, the prospective strata managers, who also happened to own a unit in the development, notified us that any amount of rain caused a major, chronic flooding issue in the building’s carpark. 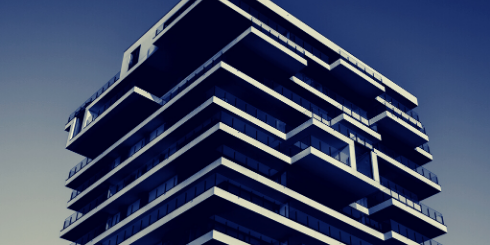 This issue was affecting the ongoing unit sales and was a major cause of concern for the building’s residents and current owners. Lack of buyers and substantial building defects had effectively led to the default under the mortgage facility and to our appointment;

We had to contend with the following issues:

Given the circumstances and complications, what was the potential return our clients could expect?

If we undertook a traditional course of action advertising the asset for sale, based on a valuation of the property on both an “in one line” and a “per apartment basis”, the anticipated potential return to our client was as follows: 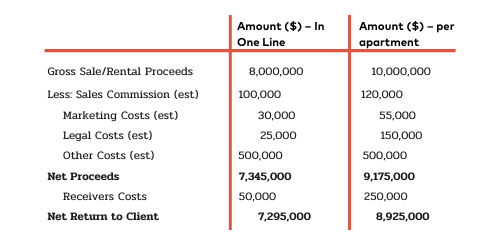 In a best-case scenario, if the building was sold on an ‘as is where is’ basis, the estimated return would result in a more than 50% write down on our client’s loan facility over a six to eight month period – not ideal.


So what did we do instead?

The first step was to immediately recommend to the client that a building inspector be commissioned to finalise a report to identify any structural issues with the building, the options and costs to rectify those issues.

Based on the building report, we formulated a proposal that would see the following occur:


Our scenario analysis highlighted that the value of the units could be increased by appropriately 20% overall and would also likely lead to a more efficient and effective sale process.

Once the proposal agreed to by the client, we:


As a result of this Work Out, the actual return to the client was more than 67 cents in the dollar: 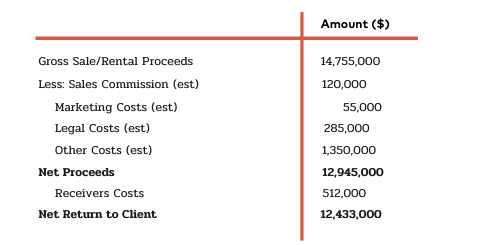 Whilst there remained a shortfall of just over 30% on the balance of the client’s facility, we were able to substantially increase the overall return to them through the work out process.

If you are interested in hearing more about our approach, on this or other matters, please don’t hesitate to contact your local Worrells office.